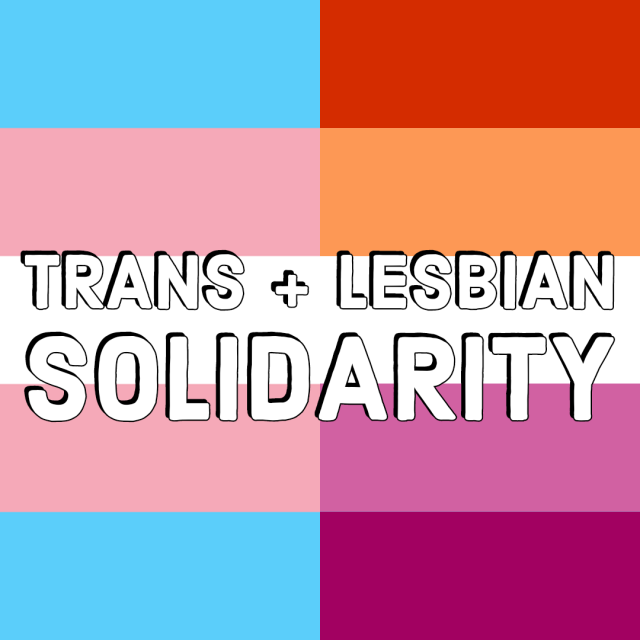 Many on my side have said that TERFs are not feminists. Their beliefs align with the patriarchal right, why would they be feminists? TERFs are, actually, feminists, I would argue. It does us, the feminist left, no good to say TERFs are not feminists, because to the public eye – and especially to the right, they are feminists. It would behoove us to take out the trash, as opposed to arguing that it isn’t our trash in the first place. Feminism is an imperfect ideology and can be a host to reactionary ideology. Dangerous and reactionary feminists, yes, but still feminists.

That being said, many of their talking points permeate common discourse, and we find them either parroting the words of mainstream reactionaries, or even the other way around. One of their most effective strategies has been to convert cisgender lesbians to their cause, by co-opting victimizing language, painting other women as the enemy, instead of the patriarchy or any other real systems of oppression. By telling cis lesbians that their enemy is the trans activists, they intend to harm trans communities, and end up unintentionally harming trans and cis people alike.

If you haven’t heard of the “cotton ceiling”, I envy you. In 2012, Planned Parenthood facilitated a conference called “Pleasure and Possibilities” which included a workshop called “Overcoming the Cotton Ceiling: Breaking Down Sexual Barriers for Queer Trans Women”. It was essentially a workshop about the true phenomenon of some cis lesbians using their sexuality to attack the gender identity of trans women, and how statements like “I am a lesbian, therefore I don’t like men, therefore I don’t date trans women” make implications about trans people that cannot be challenged, or else you will be accused of attacking their sexuality. Yet, somehow, plenty of cis lesbians exist without defining their sexuality around a strict interpretation of gender. They have existed for as long as the concept of lesbianism has, but now TERFs want to forcefully label them bisexuals, for just believing that trans women are women.

This is all part of a wildly successful attempt to reframe the cotton ceiling. A relevant example of this deliberate misunderstanding is Sarah Diddums, someone who has written for the Guardian and NewStatesmen. In her article about the cotton ceiling, she says,

“The title referenced the feminist concept of the glass ceiling – that is, the invisible barriers to promotions at work. Cotton meant underwear. Getting inside women’s knickers was treated as a discrimination issue equivalent to failing to become a CEO”.

The truth is, this isn’t how trans activists actually think. There is no deep want to get into the pants of nonconsenting women. There surely isn’t an ideological imperative, either. Most, if not all trans rights activists wouldn’t want to sleep with a TERF. I find them as repulsive as any other reactionaries. Myself and many others find the insinuation offensive and vile.

Every individual has the right to refuse sex, and sex can never be talked about as a human right. It is intellectually dishonest to say that transgender women want to rape cisgender women while also silencing the cis women who willingly have sex with them. If anyone is erasing lesbians, its those who don’t respect a lesbians identity as a lesbian, cis or trans, for agreeing that gender is a social construct and that trans women are women. If anyone is practicing misogyny, its those who belittle the cis women who sleep with trans women, condescend to them, and tell them how to identify. Cis lesbians who speak out against TERFs are routinely infantilized and talked down to, by those who think they know better than them. Let it be known that, just as transgender individuals are not a monolith and have a variety of experiences and ideas, lesbians are no different. Not all lesbians are TERFs, and, undoubtedly, not all TERFs are lesbians.

Cis lesbians expressing solidarity with trans folks is integral to combatting TERF ideology. Being vocal about an opposition to transphobia, disrupting recruitment efforts, sabotaging the platforms of TERFs, and any other form of direct action has proven to be effective against reactionary hate groups, and we cannot stand idly by hoping for justice to be presented to us.

View all posts by zoedegenerate